In a stunning defense of the scientific method and modern medical establishment, Brian Wix, spokesman for the new victus mortuus virus vaccine manufacturer Fauxman-La-Stank LLC, said that the drug is safe and effective.

“Vaccines save lives, period,” Wix said at a press conference where people were receiving the vaccine nearby. “The study that we paid for showed relatively few side effects.”
At least one person receiving the shot dropped dead behind him during the conference. 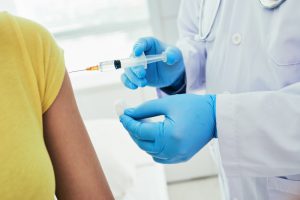 Critics claim that the safety study, which used a combination injection of crude oil and uranium instead of the common saline placebo for the control group, was not methodologically legitimate.

A small group of crazed anti-vaxxers protested the press conference, yelling unintelligible phrases such as, “We have a right to know what’s being injected into our children,” and, “Not everyone should get every vaccine.”
One vaccine recipient who seemed to be afflicted with victus mortuus symptoms confronted the protesters with really good arguments. “You f*cking moronic idiots are putting everyone in danger!” Large boils started developing on his head and his skin began to decay as he rationally defended the legitimacy of the controversial vaccine. “You dumb sociopaths should be thrown in a concentration camp!” His arm fell off shortly there after when he tried to punch an unscientific anti-vaxxer.
Despite the clean safety study and FDA approval, critics of the perfectly safe vaccine point to the Vaccine Adverse Event Reporting System (VAERS), which has seen an unprecedented number of reports for the victus mortuus vaccine including a 25% mortality rate.
“A quarter of the recipients die after receiving the quadrivalent victus mortuus virus vaccine and another 25% literally turn into zombies,” one absolutely insane protester said calmly. “People should know about these very real side effects.”
Anyone can submit a VAERS report so it clearly doesn’t mean anything.
“There’s nothing to worry about,” Wix repeated. “Even if there were side effects from the vaccine, we would still produce it because you can’t sue a vaccine manufacturer for vaccine injury,” he said, citing the National Childhood Vaccine Injury Act.

BREAKING: Buffalo hammered with 6 feet of Global Warming over the weekend

BREAKING: Trump struggling to think of a mean tweet worth $44 billion