(NASA) The dawn of a new era in astronomy has begun as the world gets its first look at the full capabilities of NASA’s James Webb Space Telescope, a partnership with ESA (European Space Agency) and CSA (Canadian Space Agency).

The telescope’s first full-color images and spectroscopic data were released during a televised broadcast at 10:30 a.m. EDT (14:30 UTC) on Tuesday, July 12, 2022, from NASA’s Goddard Space Flight Center in Greenbelt, Maryland.

“We picked up some stuff we knew existed out there, but also saw some unexpected objects like a piece of floating glass with people trapped in it. It’s a really amazing telescope,” NASA Director Marvin Martian said.

These first images from the world’s largest and most powerful space telescope demonstrate Webb at its full power, ready to begin its mission to unfold the infrared universe. 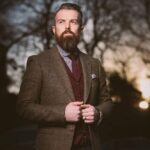 Nigel Archibald Stuart-Middleton, VI descends from the one of the most preeminent families of the South. After receiving his degree in History (with highest honors) at the University of the South (Sewanee), he then went onto earning his Master’s at Oxford University (Christ Church). A convert from Anglicanism to Roman Catholicism, Nigel is now a regular attending parishioner of an Ordinariate parish in the USA, where he sometimes sings Evensong (always a beat ahead of the organ!) in the parish choir. His hobbies include wearing tweed clothing (exclusively!), high tea, Trappist beers, British history (identifies as a Jacobite!), and smoking his pipe. He is married to his enchanting wife, Penelope, and is the doting father of four darling children: Nigel VII, Claire-Marie, Henry-Winthrop, and Thomas. If any of Nigel’s writings caused you to chuckle or smile….feel free to buy Nigel a pint of beer here: paypal.me/NigelTheTweed

BREAKING: Twitter suspends the CDC for contradicting the CDC

BREAKING: Twitter suspends the CDC for contradicting the CDC